Alice‘s husband Arden is an unscrupulous capitalist, not the most attractive male, but kind to his wife. 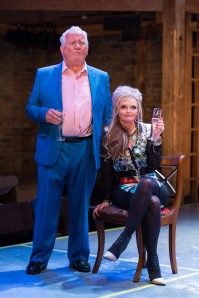 Alice‘s husband must die, because Alice has a lover and a plan.

The play, that was written by an anonymous contemporary of Shakespeare‘s and first performed in 1592, is based on a true murder case that shocked the country in 1551.

Alice, played by a splendid capricious Sharon Small, together with her lover Mosby (beautifully greasy and shallow: Keir Charles) seeks support from Arden’s employee Michael (Ian Bonar), their neighbour Clarke (fabulous in his disgustingness: Christopher Middleton), newly landless tenant Greene (Tom Padley), who had been seen off by Arden, and two career criminals.

Big promises are made all over, and here Mosby’s sister Susan (in a wonderful tragicomical interpretation by Elspeth Brodie) plays a central part. The pressure to perform keeps rising, but murder turns out to be more difficult than expected. Arden, in Ian Redford a reckless businessman with no consideration but for his own concern, however also clumsy, naïve and cute-ish, with Franklin (Geoffrey Freshwater) as his own real human contact, seems to have more luck than reason.

Even the gangsters Shakebag (spectacular: Tony Jayawardena) and Black Will (Jay Simpson, with a touch of Pulp Fiction) meet obstacles and they cause side-splitting delays.

Ultimately, however, there is no turning back …

Bittersweet-touching, the scene when Joan Iyiola sings the folk ballad “The Butcher Boy“” with the line “I wish I were a maid again”, the song of longing for one’s forever lost innocence, right before justice takes its course.

Directed by Polly Findlay, the classic criminal case turns into a thrilling-comical-tragic current day conspiracy in a stuffy middle-class environment.

This production is part of the RSC Roaring Girls season, a series of shows in Swan and Courtyard Theatre with a focus on strong-willed women, stewarded by the RSC’s Deputy Artistic Director Erica Whyman.