A production in the context of the Royal Shakespeare Company’s “Roman Season”, Stratford-upon-Avon, 3 March to 9 September 217 in Stratford, in London, Barbican Theatre from 24 November 2017 to 20 January 2018, directed by Angus Jackson.

The plot creeps up, subtly at first, suddenly disturbing, urging, electrifying, surging, subsiding and self-destructive like the conspiracy itself. Near impossible not to feel how closely the emotions and demagogy of classical times match our own world of experience, even if the 21st century’s rhetoric is hardly on the same quality level.

On the backdrop of Robert Innes Hopkins’s puristic set, reflecting the Roman Republic’s brutal imperialistic arrogance, including the disturbing sculpture of a lion devouring a horse, the well-known drama unfolds in 2.5 gripping hours.
Brutus, in a highly sensitive interpretation by Alex Waldmann, is, in spite of his distinguished social status, an insecure person, torn between his friendship with Caesar and his sense of duty towards Rome. In his attempts to pacify his conscience, he paves the way towards his so literal end. Waldmann gives him traits of a reluctant hero who cannot forgive himself that there was no clean way out, and he depicts him with a tenderness, as if it were his best friend.
Cassius, the actual instigator of the conspiracy, is, impersonated by Martin Hutson, in wonderfully overstrung hands. A character, utterly unimpeded by scruples of any kind, jumping into action out of personal vexation and political conviction, this Cassius is a conveyor of uneasy feelings.

Mark Antony, played by James Corrigan, is the seemingly noble picker-upper of shards, ultimately proven right by fate, at least in the context of these events. Corrigan operates his ice-cold calculation, his targeted manipulation with a gentle air of good-boy innocence. In the unequalled funeral speech, he plays people’s minds like an orchestra’s string section and thus unleashes the civil war.

Julius Caesar, as portrayed by Andrew Woodall, is like a fish out of water in non-military life, used to giving orders, an egomaniac who tries to make up for his health deficiency and lack of diplomatic skills with vanity and obsession with power.
Also impressive: Tom McCall as Casca, the cynic who sees Caesar’s interaction with ordinary people as nothing but theatrical gimmicks, which leaves him with sheer contempt for the populace’s darling.
Portia, wife of Brutus, has little time to express her feelings in this male-dominated play, but Hannah Morris is absolutely amazing in filling this part with life.

Faustus and man’s eternal temptation to sell his soul. Marlowe and Goethe take their title character from the same source, but Marlowe’s Faustus is, like Marlowe himself, an enfant terrible, a hectic, restless, indomitable and intellectually insatiable genius.

In this production, directed by Maria Aberg, one aspect is clear from the very beginning: Mephistopheles and Faustus are one, evil does not lurk outside or in other people. It is the result of human free choice and ponderation of interests – be it for the sake of knowledge or be it to satisfy the traditional addictive habits that Marlowe presents in their categorisation as seven deadly sins, a term used since the times of early Christianity: pride, covetousness, envy, wrath, lechery, gluttony and sloth. 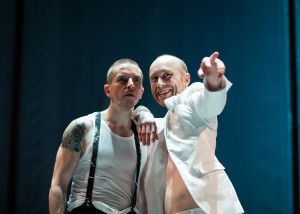 Oliver Ryan and Sandy Grierson appear on stage, dressed alike, and they each light a match. He, whose flame goes out first, plays Faustus.
His past life is standing around him as books in boxes, unsettled, and he is cursing the limitations of available knowledge. Magic, and therefore in the logic the late 16th century, hell, is supposed to satisfy his need for insight and repute.
The end is predetermined.

Director Maria Aberg draws Faustus’s inner odyssey like a Dance of Death, a downward spiral, with breathtaking dynamics of expression and movement.

The inner and outer world of the lost character, wandering about on the edge, appear in a series of grotesque and fascinating figures that seem to have sprung from intoxicated nightmares: Satan, the Seven Deadly Sins, Faustus’s ghost army that sometimes takes zombie-like features, the faceless Imperial Guard and others create, in conjunction with Orlando Gough’s space setting music, stirring eddies of pictures.

An incredible climax is reached at Faustus’s encounter with the woman of his dreams, Helen of Troy, “the face that launched a thousand ships”.
“Give me my soul again,” he pleads with her and their dance, their unlived lives, Helen’s (Jade Croot) and Faustus’s (Sandy Grierson or Oliver Ryan) attempt to connect, is one of those theatre moments with a heartbeat of their own, in which the world comes to a standstill.
A production that is disquieting. And that’s a good thing.

A deep bow to this ensemble, the director, the music and especially Ayse Tashkiran’s choreography and movement.

Stratford-upon-Avon, RSC Swan Theatre 15 January until 7 March 2015,  London, Vaudeville Theatre,  27 March to 23 May 2015 A brilliant inquisitive mind, a thinker, knowledgeable in Eastern and Western philosophies, a womanizer, Oppenheimer was many things, but most of all, he revelled in the beauty of nature’s set-up. 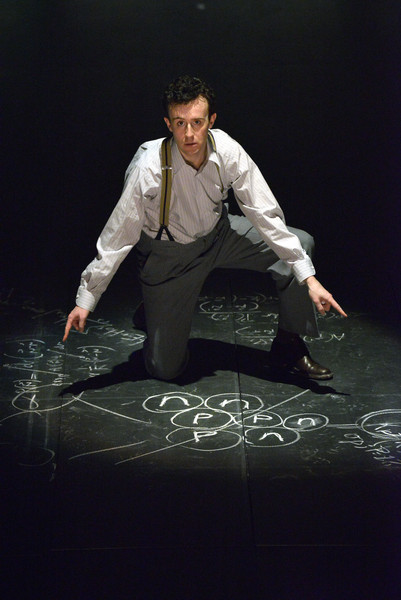 Tom Morton Smith’s new play allows the audience manifold angles from which to form their opinion, only to scramble it again, minutes later. Not a mad scientist, not a ruthless mass murderer, but then, there are moments… John Heffernan is Oppenheimer, lives and breathes Oppie, has him soft and vulnerable and utterly detached within the wink of an eye. Oppie’s team, his women, his brother, the army environment, every turning away refocuses the view on the spell that Heffernan has his character bind his world with. Jean Tatlock, Oppenheimer’s on-and-off lover, is played by Catherine Steadman and she leaves no doubt about why these two were drawn to each other, but couldn’t coexist. 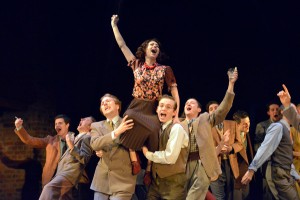 Kitty Puening Harrison (Thomasin Rand), his wife who follows him to Los Alamos, but who can’t hold him either – a very touching portrayal of just another lost soul.

But so are his co-researchers and students: Edward Teller (Ben Allen), the Hungarian super brain who was then already hatching the hydrogen bomb, Hans Bethe (Tom McCall), German refugee with a cause and the means to fulfil it, Giovanni Rossi Lomanitz (Oliver Johnstone), Bob Serber (Jamie Wilkes) and Joe Weinberg (Daniel Boyd), they all appear to be like lost electrons, buzzing about in the same space as Oppie, who is as much one of them as the attracting proton and also the splitting particle. Only Oppenheimer’s younger brother Frank (Mike Grady-Hall), his wife Jackie (Hedydd Dylan) and psychologist Ruth Tolman (Laura Cubbit) have an air of self-contained life about them. It is this meticulous depiction of human relationships in all their imperfection, that is the ensemble’s and the production’s foremost strength. Scary and stunning!

The remarkable plainness of the realisation that Hiroshima and Nagasaki were just about making a statement and Oppenheimer’s laconic line “I feel like I’ve dropped a loaded gun in a playground”, that is perhaps all that is needed to be said about the bomb itself, though the way in which the atomic test in the desert of New Mexico is enacted and the factual description of the indescribable actual consequences of Little Boy and Fat Man are staggering moments that are bound to leave a lasting impression. A well-deserved sell-out right from the start. Director: Angus Jackson, music by Grant Olding and a striking design by James Hopkins. Photos: Keith Pattison © RSC